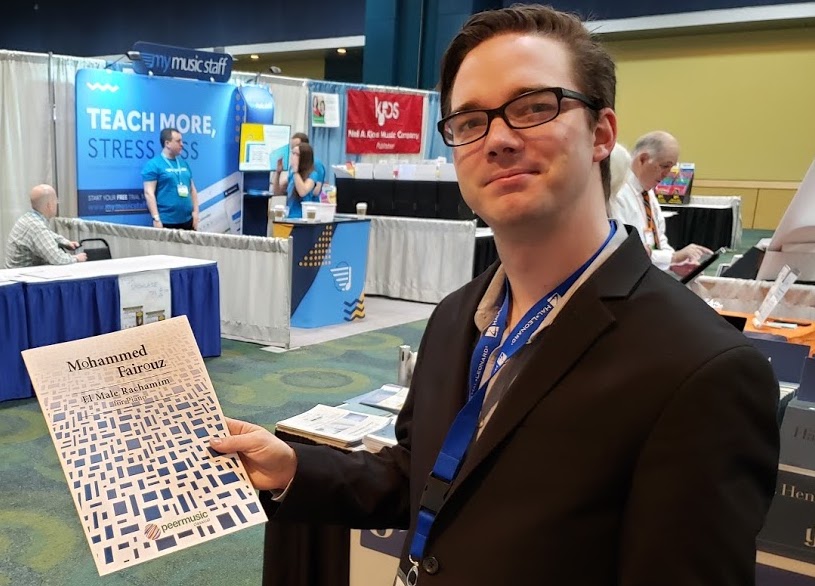 So here’s my report on MTNA 2019. Some of the sentiments I expressed in my last post were true once again, and the utopian nature of the conference reached some new highs. A lot of this had to do with the gorgeous Fazioli concert grand piano in a booth right next to Hal Leonard, which received more attention than an adoptable puppy at a pet store. One by one, pianists set down their tote bags and briefcases to work their magic on the piano. Each time, the abstraction of all the sheet music, brochures, iPad apps, and instructional videos gave way to a vital moment. I heard lots of exciting snippets of rep on the piano: Ives’s Concord Sonata, Prokofiev’s Sixth Sonata, and Rachmaninoff’s Second Sonata. At one point, a young boy played a Chopin nocturne with such wisdom and refinement that he drew a crowd. An even larger crowd appeared when a pianist, violinist, and cellist set up and played straight through the first movement of Mendelssohn’s Piano Trio No. 2. When I had a chance to try out the piano, I played a bit of the Schubert B-flat and marveled at the singing tone of the instrument.

Traffic in the Hal Leonard booth was sometimes casual, sometimes lively, never frantic. I was delighted to encounter many people looking for duets or duos, and the post-lecture rushes brought sudden interest in composers like Florence Price and Manuel Ponce. I enjoyed pointing a few people to some neat duets or recommending a particular new Henle edition (or the Mohammed Fairouz piece you see me holding in the photo). We had a Roland digital piano stationed in the middle of the action, where many people tried out music from the displays. I enjoyed watching Hal Leonard composers Jennifer Linn and Lynda Lybeck-Robinson taking turns sharing the bench with customers who were interested in their music. At one point, our booth turned into an inadvertent advertisement (say that three times fast) for our vocal catalogue, as I sat down at the Roland and accompanied some singers on some musical theatre songs (“A Part of That” from The Last Five Years and “The Beauty Is” from The Light in the Piazza).

As usual, I wish I had taken time to walk around the exhibit hall to see if any new technologies caught my eye. And I didn’t get to a single session, but I had seen a listing for one about Scriabin’s most pedagogically friendly preludes. That would have been awesome.

Spokane seemed a slightly oddball choice for the conference, but all doubts were assuaged. The city was eminently walkable, chill, and friendly. Though there was snow on the ground when I arrived, the last couple days featured sunny early-spring weather. A full moon looked down on the nightlife, and the warming of the weather in the last couple days served to enhance the happy new connections and new knowledge.