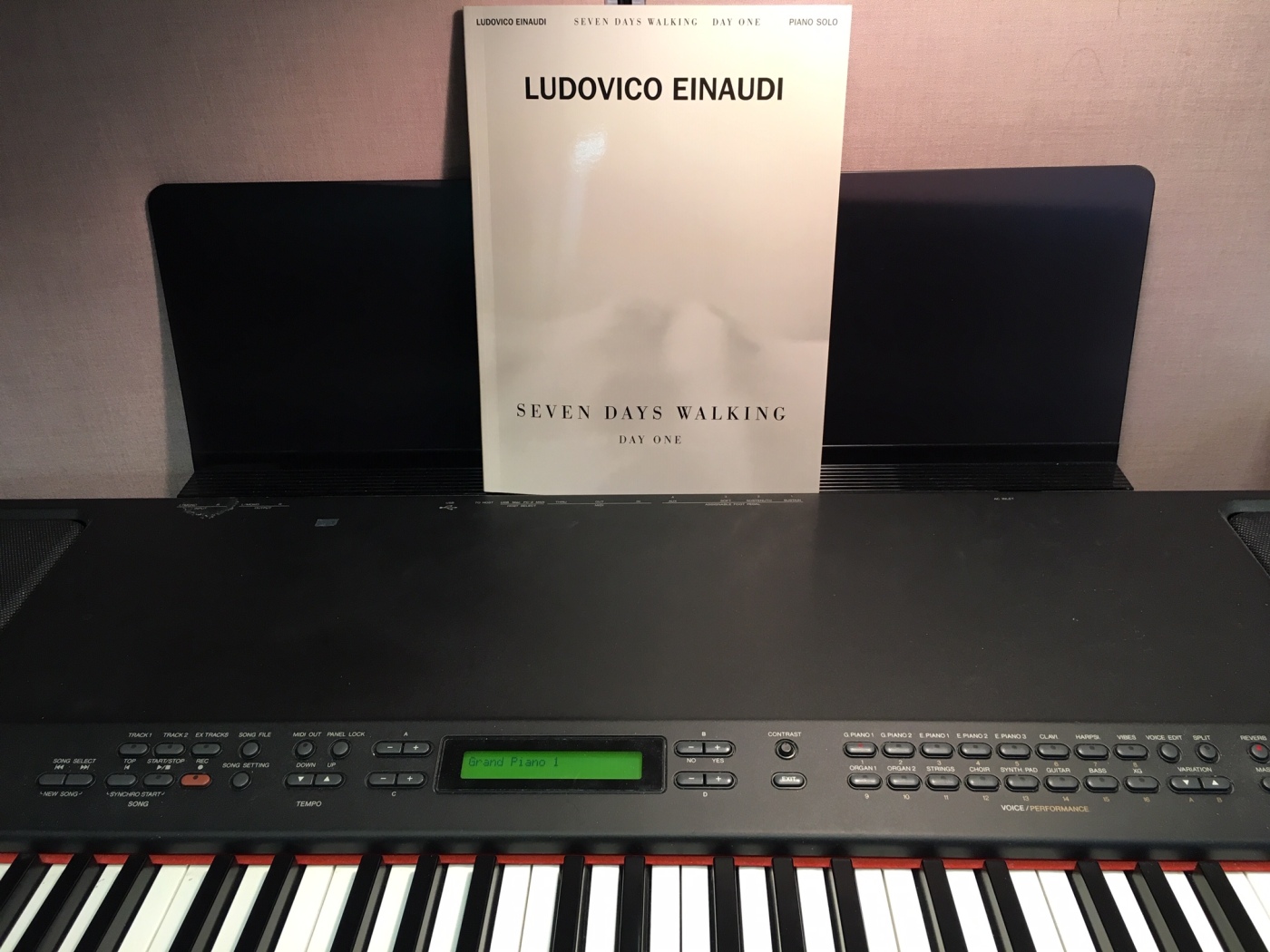 Ludovico Einaudi writes quiet, simple, meditative music, mostly for piano. And he’s a global phenomenon. He sold out seven nights at the Barbican in London. His latest album, Seven Days Walking: Day One, achieved two million online streams on its release day, making it the fastest streamed classical album of all time.

Meanwhile, from my classical elitist armchair, I’ve joked about his music, sight-read excerpts from sheet music collections and left shaking my head, and generally viewed him as the ultimate hack.

But yesterday, a rainy morning at the office, I decided to sit down to play through the new Seven Days Walking: Day One sheet music folio and try once again to understand what the fuss was about.

The second page of the book showed a photo of Mr. Einaudi walking thoughtfully in a snowstorm as birds flew overhead, with a note above the photo describing how he took many walks in the mountains in January 2018 and his thoughts “roamed free.”

I already wanted to hate it.

The first piece, “Low Mist Var. I,” was filled with nothing but whole notes at a tempo marking of Q=50-54. Daring, in a way. I started to play.

Halfway through “Ascent,” I got bored and stopped. I had traversed many musical mountain ranges, most of them in A minor. Time and again, I was frustrated by the formulaic nature of the music, in which Einaudi states a chord progression with some kind of delicate melodic gesture, and repeats the sequence several times with slight changes in texture. I sort of rolled my eyes at the manuscript samples included in the book, which make the music look even simpler than it is. If I had to pick a favorite from the set, I’d say “Matches”, which is the most harmonically interesting, quite beautiful, and also shows some restraint by not spinning the chord progression out endlessly.

But it’s a bit unfair for me to review Einaudi in terms of his compositional devices. There’s something undeniably effective about this music if you’re using it not for high intellectual stimulation but for letting your thoughts roam free. I’ll admit I’ve played pieces by similar composers (Hauschka, Jóhan Jóhansson, Max Richter, etc.) in church services, and they work really well in that setting. The openness of the music lets you project thoughts onto it.

I imagined an average American teenage piano student listening to this Einaudi album and thinking “I can play that!” in a way that probably doesn’t happen with most classical music. I imagined this teen buying the book, sitting down at the piano and digging into the simple but noble chords of “Low Mist Var. I.” Indeed, the whole book is attainable by an intermediate-level student. And the pieces are pedagogically useful in that they train beautiful tone quality and legato phrasing. If you play this music artlessly, it’s going to sound horrible.

Then I started thinking about those two million Spotify streams and where they came from on that mid-March release day: a Chicago loft apartment, a woman walking her beloved dog, a subway commuter trying to find a different headspace, someone dealing with unfathomable personal sadness or loss. In a way, this music defies criticism because I can understand it being meaningful for so many people. Maybe the popularity of Einaudi speaks to a larger phenomenon that people are looking for quieter, more delicate music than the world of pop and rock can offer. This is a trend that I fully support, but my only frustration is if people find Einaudi and think that that’s as far as they need to go into “classical” music. There’s so much that music can do besides simple chord progressions and arpeggios. I hope some of these listeners eventually discover the reassurances of Beethoven’s late string quartets or the heart-on-sleeve emotion of Mahler’s symphonic slow movements. They might even find they like some contemporary chamber music. Christopher Cerrone’s South Catalina is a built on an Einaudi-esque continuing chord progression, similarly conducive to meditation, but might point the way forward to some bolder discoveries.

Maybe the other unspoken appeal of Einaudi’s music is that it feels detached from any nationality. Yes, the harmonies and textures are derived from Western music, but there are little to no traces of specifically Italian or German or Russian or French musical style. It’s music distilled to basic elements, and therefore it reaches a pretty universal audience. If people are consciously listening to Einaudi for that reason, then maybe we’ve reached a true postmodern age in classical music.

Click here to see all of Einaudi’s piano music in print.